The Centre on Monday called protesting farmers for a meeting on Wednesday, December 30, in Delhi to discuss the three contentious farm laws, after the farmers’ unions agreed to restart negotiations with the government in a bid to resolve the stalemate. The invite comes amid one of the largest strikes by the farmers’ unions on the borders of the national capital in decades to demand that the Centre revoke the three laws approved by Parliament in September. The farmers have been camping at the borders since November 26.

The three laws essentially change the way India’s farmers do business by creating free markets, as opposed to a network of decades-old, government marketplaces, allowing traders to stockpile essential commodities for future sales and laying down a national framework for contract farming.

As the protests enter their second month with tens of thousands of farmers hunkering down at the Capital’s borders, a glimmer of progress in the standoff came on Saturday last week after the farmers’ union sent a letter to a senior bureaucrat of the Union agriculture ministry in which they agreed to hold delegation-level talks with the central government.

The farmers have stated that the talks must be geared toward a repeal of the three laws, which they say will hurt their incomes. Talks between the farmers’ representatives and a team comprising three Union ministers — Narendra Tomar, Piyush Goyal and Som Parkash — had run aground on December 8, after the unions’ meeting with home minister Amit Shah.

The invite for talks – sixth such – comes after several BJP leaders and Union ministers interacted with farmers at Chennai in Tamil Nadu and Amethi in Uttar Pradesh. Union agriculture minister Narendra Singh Tomar had appealed to the farmers to end their protest and hold talks with the government. “I hope they will understand the importance of the new farm laws, and the issue will be resolved soon,” Tomar had said.

In its previous letter to farmers’ unions, the government said it was ready to not only discuss existing proposals but also new demands the farmers may have. “If there are any new issues other than the proposals discussed on December 3, then the government is ready to discuss everything with an open mind,” joint secretary Vivek Agrawal of the agriculture ministry had written in a letter to more than 30 farm leaders.

A bitter protest was called by thousands of farmers hailing from Punjab and Haryana – now joined by farmers from across the country last month after the government pushed the three laws – Farmers’ Produce Trade and Commerce (Promotion and Facilitation) Bill, 2020, Farmers (Empowerment and Protection) Agreement on Price Assurance and Farm Services Bill, 2020, and Essential Commodities (Amendment) Bill, 2020 – through Parliament in September. 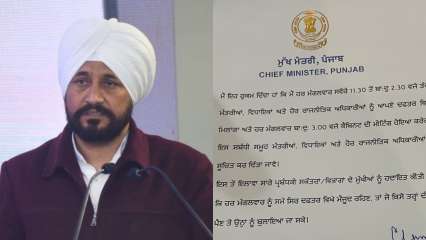 Punjab Cabinet reshuffle to take place tomorrow at 11:30 am