Britain is set to deploy an approved Pfizer/BioNTech COVID-19 vaccine next week, confirmed Prime Minister Boris Johnson on Wednesday. This makes it the West’s first country to formally endorse a jab. However, the vaccine will be available only to high-risk category patients right now, and the PM has warned against getting carried away by “over optimism.”

You can track coronavirus cases, deaths and testing rates at the national and State levels here. A list of State Helpline numbers is available as well.

Here are the updates:

Committed to engage with Indian govt. on making vaccine available in country: Pfizer

Global pharma major Pfizer on Thursday said it remains committed to engaging with the Indian government to explore opportunities to make Pfizer/BioNTech vaccine available in the country.

The U.K. on Wednesday became the first country to approve the Pfizer/BioNTech vaccine against COVID-19 with the UK regulator Medicines and Healthcare products Regulatory Agency (MHRA)granting a temporary authorisation for its emergency use.

“Right now we are in discussions with many governments around the world and remain committed to engaging with the Government of India and explore opportunities to make this vaccine available for use in the country,” a Pfizer spokesperson said in a statement.

The AAP government informed the Delhi High Court on Thursday that no night curfew would be imposed in the national capital, or parts of it, for now, to contain the spread of coronavirus.

The submission was made before a bench of Justices Hima Kohli and Subramonium Prasad in response to the court’s query on November 26 as to whether night curfew would be imposed in Delhi to contain spread of COVID-19 infection, as has been done in some other states.

Women have borne brunt of wage decrease due to COVID-19, says ILO

Women and lower-paid workers have disproportionately borne the brunt of the decrease in wages due to the COVID-19 crisis as their working hours were reduced, according to the International Labour Organisation’s (ILO) Global Wage Report 2020-2021.

The report, released on Wednesday, said global wage growth fluctuated between 1.6% and 2.2% in the four years preceding the pandemic, that is 2016 to 2019.

Taking to Twitter, the Congress leader said that the Bharatiya Janata Party (BJP) had promised free vaccine to everyone in Bihar during election campaigning.

Railway authorities on Thursday extended the permission given to lawyers practising in courts and registered clerks of advocates to travel in special Mumbai suburban trains during specific timings “till further advice“.

Earlier, on October 26, the authorities had permitted lawyers to travel in the local trains, currently being run only for essential services staff because of the COVID-19 pandemic, till November 23.

On Thursday, the Central Railway and the Western Railway, in a joint press release, extended the permission given to them.

CISCE requests for partial reopening of schools from Jan for Class 10, 12

The Chief Executive and Secretary Council for the Indian School Certificate Examinations (CISCE) has written to all Chief Ministers to allow schools to reopen partially from January onwards, especially for students of Class 10 and 12 who will be appearing for board exams.

The council has also written to the Chief Election Commissioner of India to share the poll schedule of the States where elections are due in April and May so the date sheet for board exams can be finalised accordingly.

In a unanimous resolution of the PCI said, “The council resolves to recommend to all the state governments, Union Territories and the Central government to frame and implement a group insurance scheme for the journalists in the pattern of the policy framed by the Haryana Government.”

“The council also recommends to the Central government to include the journalists, who died due to COVID-19, in the category of COVID warriors like the doctors and others and confer them with the same benefits,” it said.

In line with the resolution, the PCI has sent letters to the Ministry of Information and Broadcasting and all Chief Secretaries of States and Union Territories. — PTI

The Interpol has warned law enforcement agencies across the globe that organised criminal networks could try to advertise and sell fake COVID-19 vaccines physically and on the internet.

In an Orange notice issued to all 194 member countries on Wednesday, the Lyon-based international police cooperation body warned agencies to prepare for potential criminal activity in relation to “the falsification, theft and illegal advertising of COVID-19 and flu vaccines“.

“It also includes examples of crimes where individuals have been advertising, selling and administering fake vaccines,” a statement from the Interpol said.

The CBI, which is the national central bureau for India, is tasked with coordination with the Interpol.– PTI

India’s COVID-19 caseload went past 95 lakh, while the total number of people who have recuperated from the disease surged to 89.73 lakh pushing the national recovery rate to 94.11%, according to the Union Health Ministry data updated on Thursday.

The number of people who have recuperated from the disease surged to 89,73,373 pushing the national recovery rate to 94.11%, while the COVID-19 case fatality rate stands at 1.45%.

The active COVID-19 caseload continued to remain below 5 lakh.There are 4,22,943 active coronavirus infections in the country which comprises 4.44% of the total caseload, the data stated. – PTI

On a day when Delhi witnessed the highest number of COVID-19 tests in 24 hours — 78,949 — only 3,944 new cases were reported and the positivity rate was 5%, which is lower than the average daily positivity of 11.65%recorded in November, according to a health bulletin released by the Delhi government on Wednesday.

Prithvi Raj, scion of the erstwhile royal family of Jaipur and former MP from Dausa, died in Jaipur on Wednesday due to the complications arising out of COVID-19. Mr. Prithvi Raj, 84, suffered a massive cardiac arrest at a private hospital before his death.

Mr. Prithvi Raj was the son of the erstwhile Jaipur ruler, Sawai Man Singh II, and his second wife Kishore Kanwar. He was elected an MP from Dausa on the Swatantra Party’s ticket in 1962.

Mr. Prithvi Raj played an iconic role in launching Rajasthan as a tourism destination. He was director of the royal property and former residence of Jaipur rulers, Rambagh Palace, which was converted into a luxury hotel.

(With inputs from Agencies) 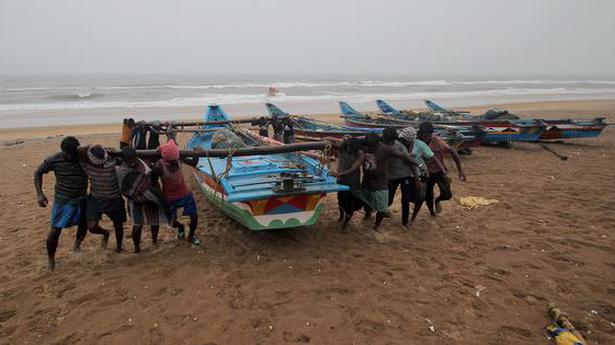 Odisha, Bengal grapple with evacuation ahead of cyclone Yaas

Pentagon On Lockdown After Reports Of Shooting At Nearby Subway Station